TYESHA OLDEN: IT’S ALL UP FROM HERE

For Tyesha Olden, the struggle was constant.

To be sure, she was trying hard to get her life on track. She had dropped out of high school when asthma caused her to miss too many days to catch up, but she’d signed up for Job Corps and earned her GED. 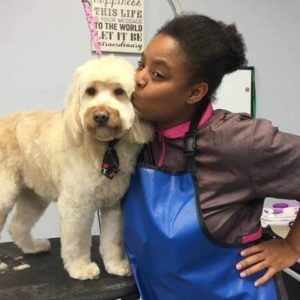 She was working, but at odd jobs – picking up trash along the highway, cleaning up a house that had burned – that didn’t pay enough to cover her needs, or those of her two-year-old daughter, LaDonna.

Her grandmother had died when Ty discovered she was pregnant. Her mother passed when the baby was just four months old. Her own father was not around much. Neither was the baby’s dad.

She had a car, but it was the only place she could call home. Sometimes, she and LaDonna could stay with a relative of the baby’s father. Other times, LaDonna slept indoors, while Ty made her bed in the car, parked outside the relative’s home.

Seeking greater stability, and thinking her love of dogs might qualify her for a job somewhere in the pet care business, Ty discovered the Grooming Project. She went through the multiple interviews executive director Natasha Kirsch requires to identify those who meet the project’s qualifications – single parents of young children on society’s fringes, with barriers to employment and the will and temperament to overcome them.

In November 2016, she was accepted, and isn’t looking back.

“My goal,” says the thoughtful young woman who has felt alone in the world, “is to get on my feet and not have to depend on other people for anything.”

At the Grooming Project, Ty has found more than expert training for a career that can sustain herself and her child. She’s found a whole support network to help her achieve the independence she seeks.

“They even helped with a Christmas celebration for my daughter,” Ty says. “This has become my newfound family.”

And of course, there’s training in grooming dogs, which will prepare Ty for a good-paying job – one she believes she’ll enjoy.

“I’ve always loved animals. This is my passion,” she says. “The first time I saw a dog I had groomed, I couldn’t believe I’d done that!

“To see the difference in the dog from when they come in until they leave, and the owner’s face so happy when they see their dog – that’s what makes my day,” she says.

Her volunteer mentor, Terry Guignon, is both coach and cheerleader. She gave Ty a camera for her birthday, so she could take before and after pictures of the dogs she’s groomed and hold on to that feeling of accomplishment, and has high hopes for the young mom’s future.

“Ty is amazing,” Terry says. “She is very independent, and I think she will follow her instincts and succeed in anything she aspires to do. She is very responsible and works hard to achieve her goals.

“I’ve always had to figure it out as I go,” Ty admits. What she’s figuring out now, as she heads toward spring internships and graduation soon after, is a place to live independently, indoors, with her daughter.

“Sleeping in a car is not good,” she says. “I want to get on my feet now, while my daughter is young enough she won’t remember this.

She hopes someday to own her own dog grooming salon, but for now, she’s focused on making the most of the opportunity the Grooming Project has given her to leave some of her struggles behind.

“This program is a blessing, and I don’t take it lightly,” she says. “So many people are taking time to help me, I want to put the same energy back.

“It’s all going up from here.”