Got a question? Shikina Turner probably knows the answer, and if not, she knows how to find it.

“She is very smart and knows everything,” says Natasha Kirsch, The Grooming Project founder, of the outspoken mother of four known to friends and family as Shay. 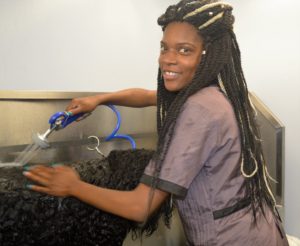 “I’m very resourceful,” says Shay herself, with an air of confidence born of experience.

That’s because Shay Turner has long had to make her own way through life. Along the way she has helped make things easier for
others when she can, helping them find food, health care, housing, transportation and other services. It’s a philosophy that’s central to her world view.

“I don’t want to see anyone hurting,” she says. “Everyone should have a chance to prosper.”

As she completes the Grooming Project training program, she’s learning that “everyone” can apply to her, too.

First and foremost a mom

The youngest of her mother’s four children, Shay spent her childhood in and out of foster care and group homes.

“I raised myself, was in juvie, ran away, met up with the wrong people and made some bad choices,” she says, although acknowledges that today, her relationship with her mom is solid and loving.

Shay graduated from high school and studied criminal justice at Penn Valley, but left school after the birth of one of her children. She took customer service jobs, was homeless for awhile and relied on ReStart transitional housing until getting into public housing four years ago.

She remains there today with her children: Antonio, 9; Shanarea, 6; Deauvi, 3; and one-year-old Messiah. Her oldest has ADHD, Deauvi and Messiah both have asthma, and Deauvi was just diagnosed with epilepsy. The kids’ illnesses have complicated her job prospects, and caused her to fall behind in dog grooming training hours.

But the children come first. “They are my world,” she states firmly. “My world revolves around them.”

Throughout July Shay will be able to make up the training hours she missed earlier in the year, then will take an internship at PetSmart as a substitute for other groomers who are on vacation or call in sick – a solution that can accommodate her family responsibilities.
“I need to set an example for my kids, and if they see me quit, they’ll think that’s okay,” she says. “I don’t raise quitters.”

A step toward the future 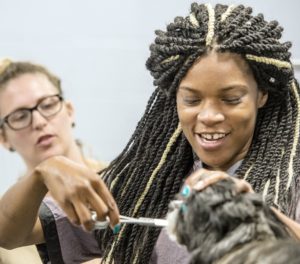 Shay learned about The Grooming Project through Operation Breakthrough, the day care/school Antonio has attended since he was a year old. She had never really thought about anything related to animals as a career – and actually, still doesn’t see dog grooming as her long-term career.

But it can be a promising means to an end, which is going back to school to become a social worker, which will put her desire to help others and her resourcefulness to practical use.

“People in poverty need resources,” she says. “My dream is to open a shelter for teens, and to help fathers. There are a lot of single fathers raising kids who don’t get acknowledged.”

She plans to put herself through school and support her kids as a dog groomer, then follow what she sees as her true calling.

“My siblings all have felonies,” she says. “I don’t want to go down that road.”

In the meantime, she finds grooming a relaxing job, and enjoys working with the dogs.

“They can’t talk to you, but they feed off your energy. You can tell when dogs are happy,” she says, recalling a dog that was rescued from a bad breeder situation, brought in for grooming by the neighboring Kansas City Spay & Neuter Clinic.

“She was severely matted, had maggots in her ears, smelled terrible, and hadn’t been loved,” Shay says. “I gave her some love despite being smelly, and I could tell how much she appreciated it, and how grooming made her feel so much better.”

Maybe dog grooming and social work aren’t really that disparate, at least as both relate to Shay’s desire to help others.

In any case, this “walking encyclopedia of the world” who uses her street knowledge, book-smarts and compassionate nature to keep moving forward, is on her way.

“Anything is possible if you set your mind to it,” she says. “If you get knocked down, get back up, put one foot forward, take baby steps. Try and try, and you will succeed.”

We’re pretty sure you will, Shay.