By Channa Steinmetz of Startland News 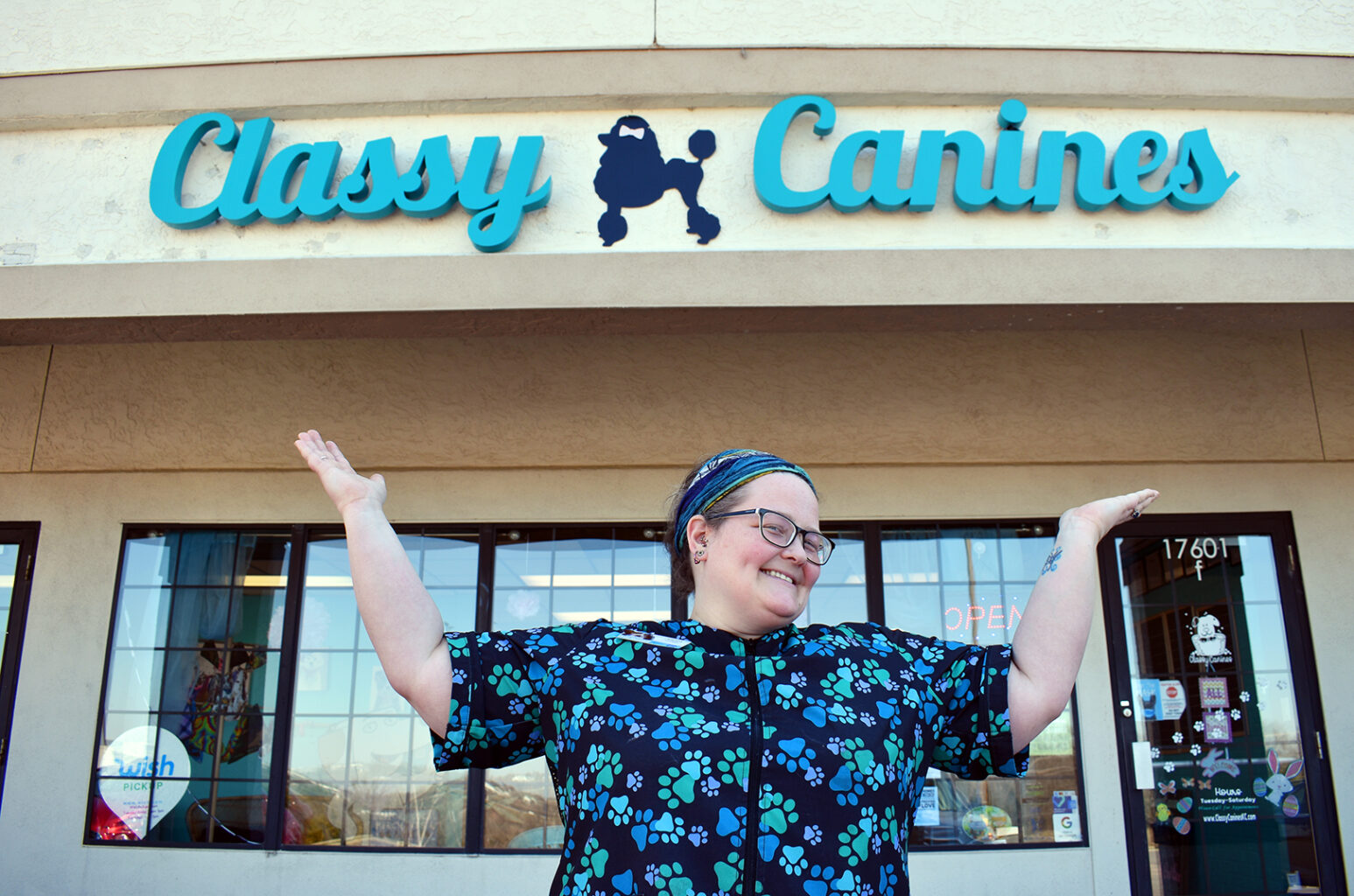 Dogs don’t judge, said Amanda McIntyre as she sat in the grooming shop she built from scratch with a thrifty $5,000 and the experience of a life-changing business program.

“I’ve been judged my whole life,” shared McIntyre, who founded Classy Canines after overcoming a turbulent battle with addiction. “But, when it comes to dogs, they just walk in with their tails wagging and are so happy to see you. When the customers come to pick them up, they’re happy and the dogs are happy. It’s so satisfying and so rewarding.”

McIntyre opened Classy Canines on July 1, 2020 in Independence, Missouri. She was able to put a down payment on her storefront after a 7 a.m. to 11:59 p.m. shift at a dierent salon earned her a $2,000 check for that week. McIntyre left her job at the other salon in the end of May and spent the entirety of June working to get her shop ready.

Even during COVID-19, McIntyre saw the need for dog grooming.

“I had a lot of people tell me I was crazy and irresponsible for opening a shop during the pandemic,” McIntyre said, “but I just had something in me that said ‘this is the time you need to do this; it’s all going to work out.’

McIntyre was introduced to dog grooming in 2019 through The Grooming Project— the pilot program of Empowering the Parent to Empower the Child (EPEC), a Kansas City-based nonprofit. The founding CEO of EPEC, Natasha Kirsch, launched The Grooming Project in 2016 as a two-generation approach to breaking the cycle of poverty, she said. It is a six-to nine-month program that requires 644 hours of hands-on grooming to graduate. Kirsch decided the program’s first iteration should be centered around dog grooming after seeing her own mother’s opportunities expand as a groomer.

“I knew my mom made a good amount of money, and she could still be exible with picking me up from school and guiding me out of trouble. Especially now, if you’re a mom working two or three dierent jobs to make ends meet, you can’t be at home parenting your kid,” Kirsch explained, noting that The Grooming Project seeks to help struggling mothers with young children.

When McIntyre first met with the team at The Grooming Project, it was the first time she had felt truly seen and understood, she shared.

“They actually cared about what I needed and what I wanted,” McIntyre said through tears. “… It’s hard to put into words what the organization has done for me and so many other people. Honestly, I’d be dead right now without them.

McIntyre’s lengthy battle with drug and alcohol addiction started in her adolescent years when her parents got a divorce, she recalled.

“My mom started drinking,” McIntyre said. “That left me at home a lot by myself. So, at an early age, I started doing drugs and drinking. I could run around and do whatever because I thought nobody was going to care.”

Decades ago at her lowest point, McIntyre was living in her car with nothing to her name. But after years struggling with addiction, McIntyre has been sober since 2013 — an accomplishment she achieved far before The Grooming Project, she shared.

The past eight years have not always been a rosy picture of sobriety, she said, noting times she was tempted to fall back into old habits. Fortunately, McIntyre has been able to take charge of her own life and lean on her support team through family, friends and those at The Grooming Project when needed.

“I found my family,” she gushed. “My mom passed in October, and I could have easily slipped back into using. Instead, I had the skills and people I needed to get through it.”

One member of McIntyre’s newfound family: Ashley Weisel, a recent graduate of The Grooming Project and now a groomer at Classy Canines. Hiring a fellow graduate from the program was a no-brainer, McIntyre said.

“I just don’t trust other people,” she admitted. “I don’t trust their knowledge and their commitment. I’m not going to hurt our brand for somebody who doesn’t get it. 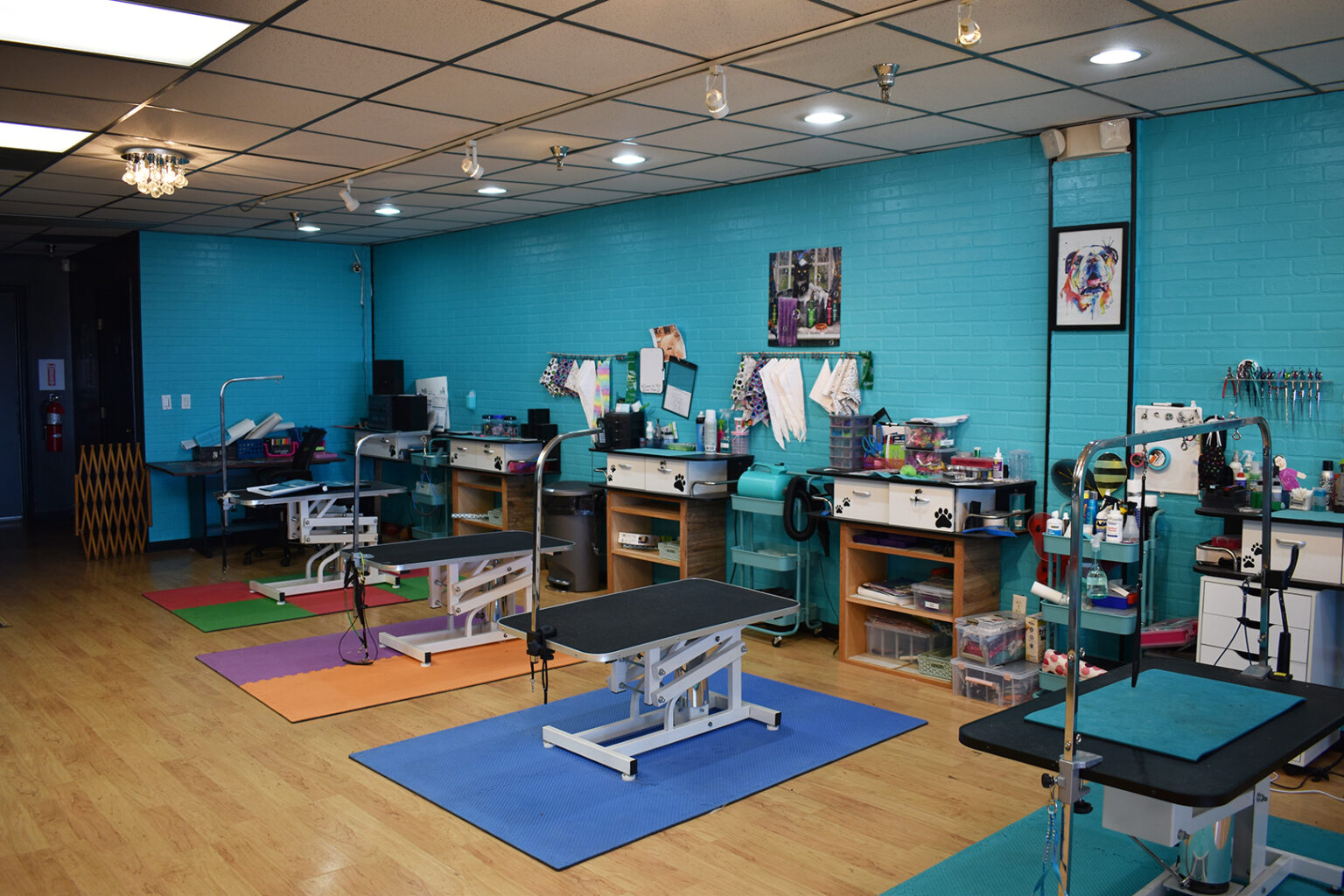 More than a grooming school

The Grooming Project has a 100-percent success rate with job placement for their students, with some women earning up to $60,000, Kirsch said. Although she is proud of those numbers, she is most grateful that students are able see themselves in a new light, she said.

Women going through the program often have spent their lives being told that they weren’t good enough, they explained. Because of the program, McIntyre and Weisel were able to erase that false narrative and create one in which they are worthy of good things, they shared.

“Somebody lending out a helping hand can be all it takes for someone going through addiction,” Weisel said. “We want better; we don’t want to live that way. If we get the help, we can actually turn it around. Natasha is really working hard at that. … Now that I’ve met Amanda and the girls, I have help. I can do this. And I actually believe that.”

The main secret behind The Grooming Project’s success: it’s designed to remove barriers in the students’ personal lives so they can be successful in and out of the classroom, Kirsch said.

“We offer wraparound services — so dental care, legal care, eyecare if you need eyeglasses — and we have about 80 partnerships with other nonprots and businesses around the city,” Kirsch said. “… A lot of what we do is lining up different partners to make sure that we can take care of what each student needs.”

One partner, Bob Sight Ford in Lee’s Summit, agreed to sell cars to graduates at the employee cost, Kirsch noted. Another partner, First Federal Bank, works to give bank accounts to students who would not otherwise be able to open an account. The bank also teamed up with Community Services League to lead a nancial literacy class at The Grooming Project.

Classes extend far beyond grooming and business. The program also teaches students about soft-skills and meditation. The meditation class helped McIntyre immensely at home, she said.

“[My son] is on the autism spectrum,” McIntyre noted. “I took the mindfulness class and applied that to my son, and it was a complete 180. He’s excelling in school and really listening.

“Meditation is really about taking care of yourself,” Weisel added, noting that self-care is extremely difficult for those suffering through depression. “We learned how to ground ourselves and be in control of our emotions. … Being in the dark for so long then finally seeing what needs to be fixed it’s like-”

“It’s like wearing your fat pants to the buffet!” McIntyre exclaimed.

Along with classes, The Grooming Project is now positioned to offer housing to students — opening newly-built dorms in 2021.

Just like The Grooming Project welcomed in McIntyre with open arms, McIntyre does the same for her customers at Classy Canines, she said.

“Customers will never get shamed here, ever,” she stated. “My employees will never be shamed. No one is allowed to be rough with a dog. All these horror stories that you read on Facebook — it doesn’t happen here.

A decade ago and before grooming school, McIntyre recalled a dog that she regularly brushed but still had matted hair. Rather than groomers teaching her how to properly brush the bottom layers of fur, she was shamed.

“Nobody had that conversation with me. Nobody cared,” McIntyre said. “It stops here. I want this salon to be the game changer. We’re about passing our education on, so that the client and the dog feel better.”

McIntyre goes above and beyond to make sure the owners and their dogs feel welcome to the salon, Kirsch raved.

“She’s got a selfie station out in front where customers can take photos of their dogs for free,” Kirsch said. “She writes ‘Thank You’ notes to her pet parents and just really provides that specialized care for her pets. I really think that’s one of the reasons for her success.

Classy Canines has serviced nearly 200 clients within less than its rst year, McIntyre shared. For the rest of 2021, McIntyre is looking to expand her shop. She hopes to eventually break down an adjacent wall to create a larger space for grooming, boarding and even teaching grooming classes of her own, she said.

Even on the more dicult days, McIntyre and Weisel said that their unwavering commitment to love and care for dogs is what keeps them motivated.

“I’ve literally had about 60 or 70 jobs in my life and dog grooming is the only thing that satises me,” McIntyre said. “I’m driven by dogs. That’s my thing. I want to be a positive speck in a horrible world. 2020 was really dark for a lot of people, and this salon was our little sunshine in Independence.”