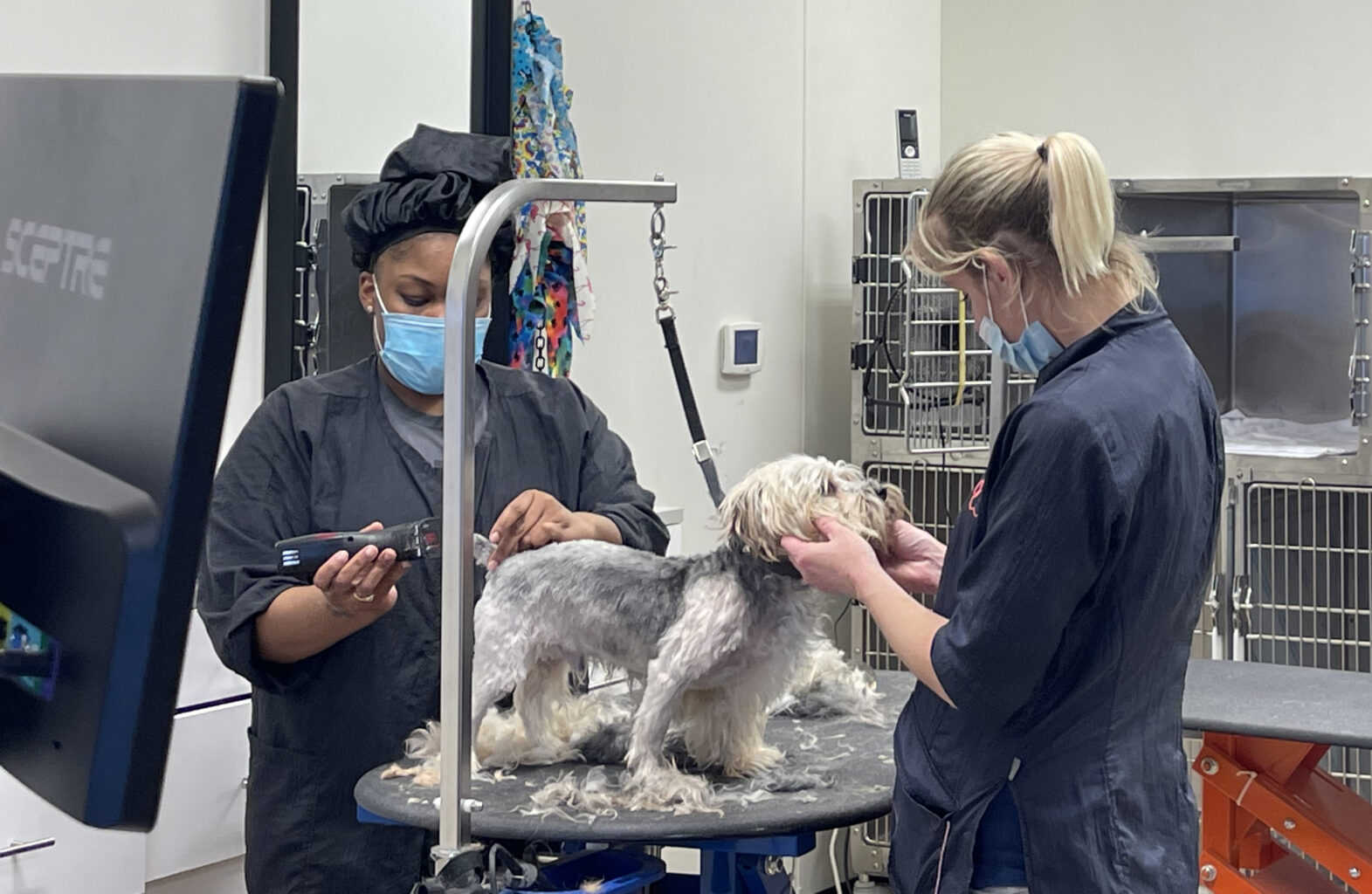 Aware of her own potential, The Salon manager, Christine Banks (left), wants to show other graduates of The Grooming School how to embrace opportunity.

When 26-year-old Christine Banks was selected to the inaugural class of The Grooming Project in 2016, she was a quiet, but strong, single mother seeking a better job—and a better future—for her two children. Her son was just taking his first steps at the time, and her daughter was about to lose her first tooth.

Now Christine is the manager of The Salon, a full-service pet grooming salon in Lee’s Summit that is an expansion of EPEC’s The Grooming Project program. Christine oversees the operations and staff, who are all graduates of the school. The Salon, Christine, and her children, now 11 and 7, are all thriving.

The product of what she calls a “rocky” upbringing, Christine earned a cosmetology license after high school. Her mother had been a hair stylist, and she thought she might make a career of it too. But she learned she couldn’t earn enough money to make ends meet working the limited hours she was scheduled.

“I was trying to go somewhere in my life, but I had a baby, and then things just happen,” Christine said.

She enrolled in community college to earn a Certified Nursing Assistant license. Although she enjoyed helping people, she discovered that many people working in the home health care field did not, and she was discouraged by the overall environment and low wages. She took an extra job working part-time at Taco Bell to help stretch the government assistance she was receiving, but that job was at night and took away from the time she could spend with her children.

Interestingly, Christine’s path to The Grooming Project was through her children. A contact at Operation Breakthrough, where they were enrolled, told her about the new dog grooming program and gave her an informational flyer when she went to pick them up one day.

“She said, ‘You will be great for the program. You should come.’ So, I went and listened to the meeting, and I was skeptical about it. But I filled out my application, and they actually picked me out of a whole bunch of other candidates,” Christine said.

Once she was accepted into The Grooming Project classes, Christine knew she was on track to a better, more personally fulfilling and financially stable future. She not only excelled at dog grooming but also found a special camaraderie with the dogs and with her fellow students.

“It was really, really amazing,” Christine said. “The pets were so calm. I never thought I would be grooming animals, but it’s relaxing, it’s therapeutic.” 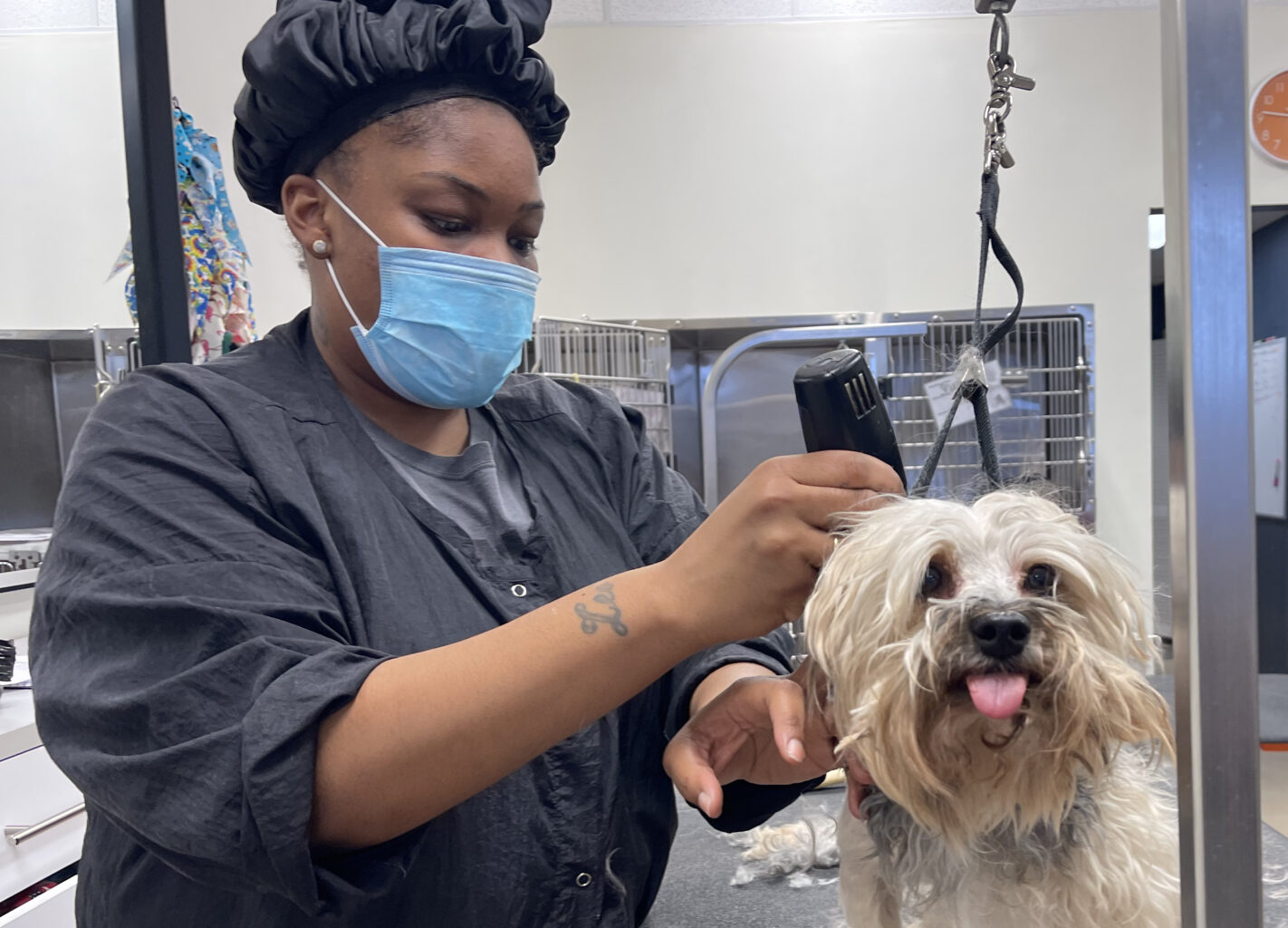 Christine also took advantage of the parenting and budget counseling offered through the school, helping her make better decisions with her children and her spending.

One of the most surprising transformations occurred as Christine honed her customer service skills. Reserved and soft-spoken by nature, Christine began coming out of her shell the more she answered the phone, greeted clients, and mingled with her classmates.

Those customer service skills, combined with her dedication to excelling at dog grooming, have served Christine well as the manager of The Salon, which she helped launch in 2019 along with another graduate of The Grooming Project. Before being promoted to manager, Christine was first an intern and then the lead groomer at The Salon.

The Salon helps graduates further sharpen their grooming skills and also acquire business operations skills they can put to use as salon operators and owners themselves one day. In addition, all salon profits are returned to The Grooming Project to fund the educational training and life coaching the students at the school receive.

Christine acknowledges that despite the support she received, making the transition from government assistance to living independently was not easy. It required planning, careful budgeting, and determination.

“I was so nervous and scared to get off,” she said, “because I always depended on it. And once I did get off of it, it was like, ‘Oh, my goodness, I’m doing this on my own.’ It felt so good.”

Christine has a dream to open her own business one day—a mobile grooming service that caters to seniors who have a hard time getting out of their homes. For now, however, her focus—and her heart—is with her children and The Salon and its staff.