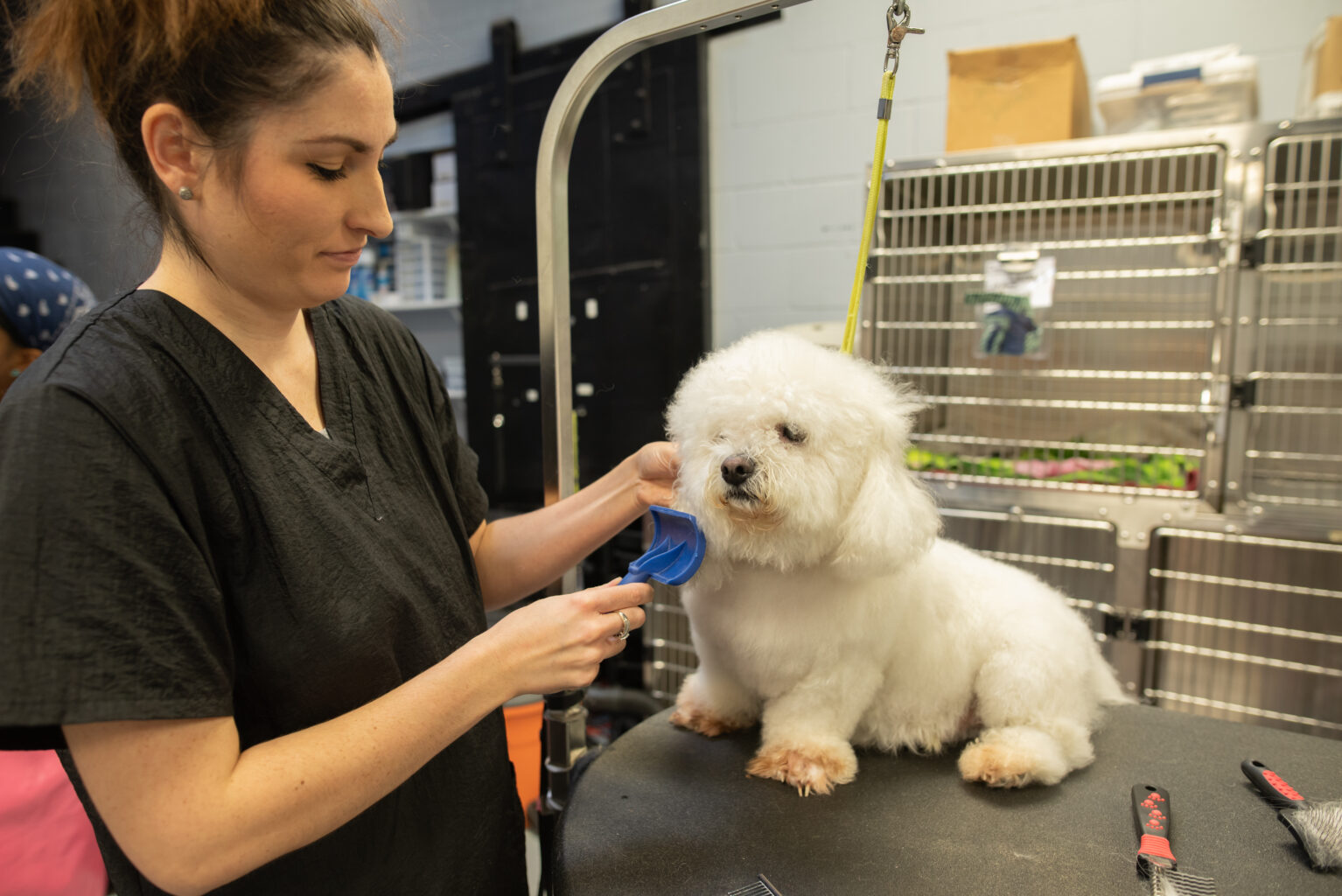 A career in pet grooming empowers this mom of three to keep her family together while her husband serves a prison term.

When 32-year-old Ashley Stillings was a little girl, her parents divorced. At just 7 years old, she made a promise to herself to someday have her own family that would always be together. More than two decades later she found herself with two young children she adored, a third one on the way, and a husband—the love of her life since middle school —facing a 12-year prison sentence. She was devastated. And determined to keep her promise.

It was 2018 and Ashley was living in Kansas City, some 70 miles from her hometown of Topeka. Were it not for a compassionate community ready to offer her trusted guidance, affordable housing, and skills training that prepared her for a family-friendly career, Ashley’s feeling of devastation might have become desolation for her and her children. But Ashley’s love of her family overpowered her fears.

“I never thought my husband would go to prison, but you get to that cliff and think, ‘I have to do something drastic,’” Ashley says. “I knew I had to take care of my kids.”

Ashley also knew that to pay the bills, the money she was making as a waitress and cleaning houses would not be enough to meet even the basic necessities of her growing family. In addition to rent, childcare, transportation, food and clothing, and healthcare, she had the added expense of communicating with her incarcerated husband, a priority for her to keep her promise. (Yes, there are costs associated with calling or visiting an incarcerated person.) Studies show that male prisoners who maintain strong family ties during incarceration have higher rates of success when they are released.

Ashley moved her family into Hope House, a Kansas City shelter for families in
need of safe housing and other support services. It was there she met Barbie Daniels, a case manager at The Grooming Project. Barbie explained how the program worked for so many struggling parents who, like her, wanted to make a living wage and still have time for their kids.

Ashley was sold on the promise of The Grooming Project, but throughout her training, she continued to have doubts about herself as a groomer.

“I was nervous until I graduated,” she says. “I never thought of myself as a dog person, but once I got more comfortable with dogs, it felt less like work. Time goes by fast, and I actually enjoy the work now.”

Training to be a groomer is not easy, especially when the dogs are nervous, because they are in an unfamiliar place with unfamiliar people. Ashley came to realize that working with those dogs helped her overcome her fears. “I’d already faced the hard part of grooming difficult dogs, so the idea of it being my career seemed less scary,” she says.

After training, Ashley moved her family back to Topeka, where her mother-in-law is able to help watch the kids and the cost of living is not as high. She commutes to Lawrence, KS, for her grooming job at Woof’s Stay and Play.

“I love going to work,” she says. “And I’m glad my kids can see a good work ethic so they can do things on their own, too.”

“Ashley is a very hard worker,” says Assistant Manager, Avery Ward. “She is super easy to work and communicate with and is always willing to volunteer to help with anything. We love having her here.”

Ashley is not afraid to take on a challenge either. Once a customer brought in a Puli, one of those dogs whose coat naturally grows into wooly, dense, and waterproof dreadlock cords. Ashley took the initiative to research how to groom the tight curls.

“It takes a special type of person to work with dogs,” Avery says. “It’s not a job for everybody, but it’s very rewarding if you know what you are doing.”

Ashley is becoming a seasoned groomer now with nearly 3 years of experience. The Grooming Project enabled her to build a career, support her young children, and stay in contact with her husband during his incarceration. All this has given her a new sense of confidence.

“The Grooming Project staff saw things in me I didn’t see in myself,” Ashley says. “I’m very proud that I’m able to pay bills and not stress about it. I can even pay for things like ballet lessons.”

Today, Ashley rents a three-bedroom house, and she’s built up a good credit record, so she hopes to buy a house this fall when her lease is up. Not too shabby for a mom who was on food stamps a few years ago. Ashley happily gave those up as soon as she started earning a livable wage as a groomer.

“I never thought I’d be able to work an 8 to 4, Monday through Friday job, and still support my kids,” she says. “I thought I’d have to work two jobs until my husband got released. I even have holidays off.”

It’s not just being able to pay the bills that is important. Ashley knows her kids are watching her. “My kids see that I’m able to take care of them. And I have more time with them.”

The adults in her life are watching, too. Her mom, her mother-in-law, and her husband all have said they are proud of her for all that she does.

Ashley has only words of encouragement for others facing the challenge of supporting their families and overcoming the hardships that poverty brings to daily life.

“I would tell them to stick with it,” Ashley says. “Some nights I came home and cried. They told me to keep going, but it was so hard to make ends meet while I was training. Finally, everything fell into place. Just trust the program. It’s been life-changing for me.”

Being the sole parent with a career is demanding, even when you love your work. But Ashley’s kids keep her going. And she knows her family will be better off when her husband comes home because, “I won’t be stressed out.” Before her husband is released, Ashley has hopes of starting her own mobile grooming business in Topeka.

“I’m scared to go out on my own, but know I will,” she says. “I have a business plan, thanks to The Grooming Project’s help.”

Having a living wage career enables Ashley to care for her young family on her terms.

“I have a sense of peace at work, and the dogs are calming,” Ashley says. “When you aren’t stressed out about food or rent, you can focus on other things. I can now spend more time with my kids and focus on them.”