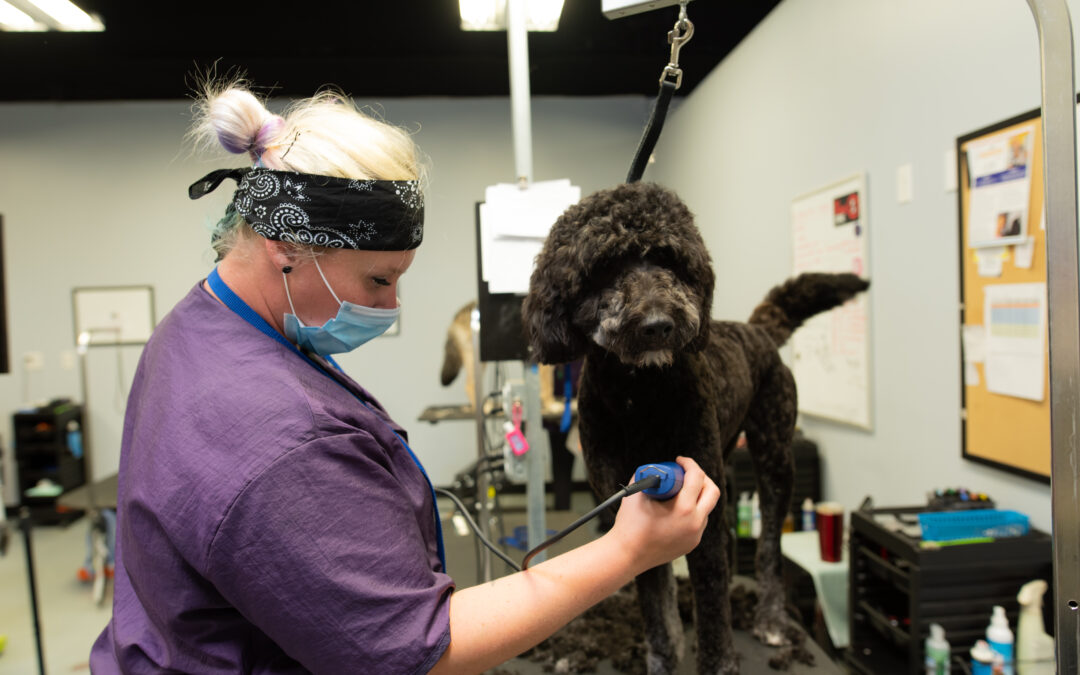 It has been said that, “When the world says, ‘Give up,’ Hope whispers, ‘Try it one more time.’

That statement, from an unknown author, aptly depicts the spirit of Grooming Project student Jessica Gabriel.

Jessica, who graduated from The Grooming Project in August, has faced many challenges and setbacks in her young life, but, happily, is now in a place she describes as “happy and settled.”

Married and the mother of three children, ages 4, 10 and 13, Jessica grew up in a small Missouri town (population 500) where drug use was prevalent.  She and her husband Seth, who’ve been together for 13 years, were both addicts.

Jessica and her family moved to Kansas City under stress, when her oldest daughter, Tierney, developed kidney disease and had to receive dialysis treatments at Children’s Mercy Hospital .

“We left everything behind, most importantly our extended family,” Jessica says.

The family stayed at Ronald McDonald House for two months while their daughter was in the hospital. After their daughter was released, the family moved to River of Refuge, a transitional living program in Raytown, Mo., that helped Jessica and her husband learn budgeting skills.

Even though their daughter’s illness stabilized through dialysis treatments, doctors gave her a medical designation of stage four renal failure and advised a kidney transplant. Unfortunately, the family’s temporary living condition made her ineligible for being added to the transplant waiting list.

The family moved into rental housing, but the couple’s drug addiction soon caused them to lose possession of their children.

That’s when perseverance really kicked in.

Although Jessica and Seth had tried drug rehab a few times without success, this time they were determined to make it work. With help from the Jackson County Family Drug Court, they kicked their drug habit and have been clean since June 7th,2019. They got their kids back after a couple months and Tierney was ready to be  added to the transplant list.

Things were looking up.

Jessica became a student at The Grooming Project in November and found an unexpected love for grooming.

“At first, I was afraid it would be too much work,” Jessica says.  I had quit many jobs over the years, because they didn’t hold my interest. But here, I was hooked after two weeks.  I found a nurturing, supportive environment and the animals have a way of relieving my stress.”

Not only did the Grooming Project teach Jessica how to earn a living wage, it also provided her with resources and connections to make her life easier. Auburn Stiner at Savior Auto partnered with The Grooming Project to get her a car, so her family no longer had to rely on busses and cabs.  The Grooming Project’s court advocacy program and legal clinic helped Jessica navigate the court system and provided free legal assistance.

Today, both Jessica and her husband are working – Jessica at Clean Pooch Grooming in Belton and her husband at Amazon. Her kids are doing well.  Thirteen-year-old Tierney is still awaiting a kidney transplant, which was stalled during the Covid outbreak.

“I am of course worried about my daughter,” Jessica says, “but I’ve learned to never give up hope. The Grooming Project taught me a usable skill, and now I believe in myself and my abilities. I also believe in the power of surrounding yourself with people who care about you and are willing to give you a chance at a better life. The Grooming Project did that, and I will always be grateful.”