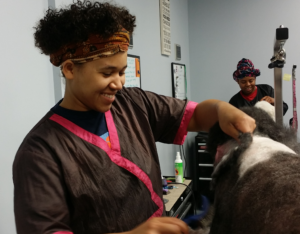 She didn’t know – never had known — her mom. Her father suffered mental health and addiction issues and wasn’t the best role model. Nor was his ex-wife, who gave Kara a home for a while, but never let her forget she was “the other”— not the real daughter — in the household.

Academically gifted, she did complete high school, graduating with a 4.2 grade point average, and she enrolled at UMKC. But depression descended upon her, and she left school after one semester. She split with her boyfriend, who kept the couple’s young son.

“I couldn’t take care of myself, much less a child,” she says. “I was depressed, I thought that’s how life was and how I was always going to feel. I had no support and was spiraling out of control.”

The tide began to turn when she got connected to counseling and was diagnosed with high-functioning Asperger’s syndrome.

“I always knew I felt different, but now I know why,” she says.

With that newfound awareness, and by then in a new relationship with the father of her second child, Jeremy, she began a job search, focusing on work with animals—something she believed might hit her sweet spot.

“I was always interested in animals and nature,” she says. “Even as a child, I watched Animal Planet and National Geographic on tv. I’ve owned cats, dogs, lizards, a turtle, rabbits. Everybody has their thing, and mine is nature and being close to animals.”

Then one day in September 2016, she happened upon an article in the Kansas City Star about Danielle Simpson, a student in The Grooming Project’s inaugural class – and her future beckoned. She started the program this past January, and graduates in June.

“It came at the right time,” she says. “I could have passed over that article, or not seen the paper that day. But I did see it, and it brought me here. I took it as a sign from the cosmos.” 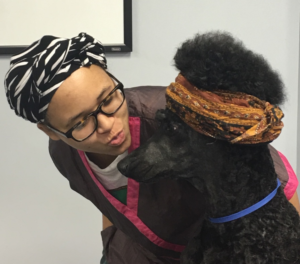 Now the young mom who struggled to find her place in the world feels confident in her skills and supported by Grooming Project staff and students. She sets high standards for her work – “I’m a quality over quantity person,” she says – and prides herself on giving each dog what it needs.

“This isn’t just about making the dog look nice,” Kara says. “I love to lather them up, give them a massage, pay attention to what they need, especially the older dogs.

The Grooming Project might just have helped her find the right place to apply her training, talent and point of view, too. Not long ago, she had an opportunity to work on a retired grand champion poodle owned by Dan Hoover, a Eudora, Kan. groomer who previously traveled the dog show circuit with standard poodles.

If she is able to work out transportation issues she hopes to be able to groom for him. It would be a good fit for Kara and her exacting standards, learning more about show grooming, a world in which “a haircut can literally be the difference between the dog winning or not.”

“Everyone needs a support system”

In the meantime, The Grooming Project has become Kara’s home away from home. The one-time high-achieving high school student still loves to learn, and that’s what she gets to do there, not just from the six-month training program, but from its extended family as well. She loves the fact that students from earlier classes, now in good jobs, come back to say “hello” from time to time.

Life is much more promising these days. She and her younger child’s father are still together. She has a chance to get a good job and provide for year-old Jeremy.

She envisions herself and her family on a piece of land, 10 acres perhaps, with a ranch house, a few dogs and horses, still grooming, maybe with a  veterinary license, and pursuing an interest in organic farming.

“I know there’s a better way. Maybe I can’t change the world,” she says, “but I can change my world.”

And the advice she seeks to pass along to those who follow her.

“Be mindful of the opportunities you’ve been given. Allow yourself to blossom,” says the young mom who has finally found the place to do just that.

Note: If you can help Kara secure a car or otherwise help her find transportation to commute from central Kansas City to Eudora, please contact The Grooming Project, 816-214-5376 or nkirsch@epeckc.org.