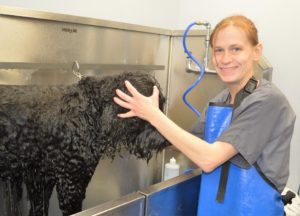 Jessica Smith is petite – smaller than some of the dogs she grooms. But don’t mistake her tiny stature for any lack of determination. Because this soon-to-be professional dog groomer is fierce, and as goal-oriented as it gets in her will to succeed.

“Let me put it this way,” says Annie Heck, her Grooming Project volunteer coach and mentor. “I would not want to be standing between Jessica and something she’s got her mind set on.“

That’s a good thing, because for most of her almost 29 years, she’s had to be fierce and determined, just to survive.

“My past is my past”

Jessica’s childhood was rough, and short. Her mother was an addict, and Jessica was in and out of foster homes, having endured physical and sexual abuse beginning at age 6 and 7.

By age 13 she’d had enough, ran away and retired to the streets. Along the way she became an addict herself, selling meth to support herself and her children, whose custody she lost and gained back as the courts tried to ensure their safety.

Now sober for several years, she faces forward these days. “My past is my past,” she shrugs, preferring to focus now on the kids, ages 5, 6 and 9, plus the 12-year-old daughter of the supportive man now in her life.

“My kids are my world,” she says simply.

She is clear-eyed about addiction. “It’s a disease, and I have to fight the disease day in and day out,” she says. “But I look at the bigger picture, I no longer see myself as an addict, and I’m learning to succeed in life.”

Jessica was suggested as a good candidate for The Grooming Project by staff at Operation Breakthrough, where her youngest child attends day care. The student stipend she receives – $160 a week throughout the training program – has been a blessing, as Jessica is the family’s sole breadwinner.

It turns out, says Natasha Kirsch, The Grooming Project founder, that the missing piece for Jessica was a job.

“I had wanted to give up,” Jessica remembers. “Then I met Natasha, and she gave me the push to lift my head back up.”

And these days, if she’s addicted to anything, it’s to grooming dogs.

Goals. This girl has ’em.

While life is still hectic – as it is for any working mom – The Grooming Project has brought Jessica some stability and enough calm midst the chaos to focus on her goals. She’s working toward her GED, something she believes is important not only for her future, but that of her children as well.

“It’s good for the kids to see that education is important,” she says.

And she is determined to become a professional dog groomer, a skill she has discovered she loves.

“With dog grooming, I have something I can wake up every morning and be excited about,” she says. “The money is nice, it lets me provide things the kids need – shoes, underwear, shirts. But what it’s really about for me is my connection with the dog. For a few hours, I bond and communicate with the dog, and its pet-parents too.

“When I come here, I walk in with a smile on my face.”

As the six-month training program comes to a close, she has an internship at Man’s Best Friend, a grooming salon in Belton, Mo. After that, the woman who’s never really had a job before, is eager to apply for full-time grooming positions and build both a resume for herself and a future for her family.

“I can budget and save money, even if it’s only a dollar at a time. I can hope and dream for something better, for my own house with the white picket fence….”

She’s tickled that her five-year-old says she wants to be a dog groomer like her mom. “It’s exciting for me to teach her about that,” Jessica says.

“Here I am, almost 29, ready to graduate and get my GED, and already my kids are on the right path, not the path I was on,” she says with pride.

“There will be rough patches, but I will get through, keep my head high and smile.

“When I go for it, it’s hard to stop me,” says the mighty mite who is leaving her past in the dust. “My children are healthy, I am going to get my GED and I am going to succeed in my career. That’s my plan, and by the grace of God, dammit, I’ll see that plan out.”

Step aside, world. Jessica’s on her way.