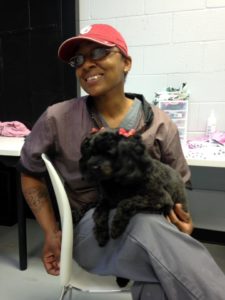 Maybe it’s because she has always loved dogs. Maybe it’s because having “been through the storm,” as she describes it, she can empathize with dogs whose roads have been rocky, too. Or maybe it’s because at The Grooming Project, she has truly found her calling and hope for her and her daughter’s future.

Whatever the reason, Danielle Simpson’s fellow Grooming Project students know when a frightened dog comes in for what might be the first grooming of its life, she’s the one who can put the pup at ease.

“The Kansas City Spay & Neuter Clinic next door brings us dogs to groom,” says Natasha Kirsch, The Grooming Project founder. “Some are strays, horribly matted, possibly abused in the past, freaking out. Danielle can calm them down and make them feel better. She’s a natural.”

She’s also persistent against all odds, a quality she has needed to get through life’s challenges, and one that that earned her a spot as the last student admitted to The Grooming Project’s inaugural class, too.

Danielle has weathered many storms over her 40 years. Run-ins with the law, stretches of unsettled housing, the needs of ailing family members and low-wage jobs punctuated by periods of unemployment weren’t conducive to the stability she and her four children needed.

She was working at Taco Bell and living with her mother last September when she learned about The Grooming Project. Her mother, recovering from a stroke, saw a tv news report about the project, and eagerly told Danielle about it.

“Her speech was impaired from the stroke, and all she could say was ‘dog,’ ‘January” and ‘Troost’,” Danielle says. “So I Googled those three words and found The Grooming Project.”

She called the next day, learning that the first class in January was already full. But Natasha took Danielle’s application over the phone, put her name on the waiting list and suggested she keep in touch.

Which she did. Daily, Natasha says.  “I was very persistent,” Danielle says.

Then in October 2015, tragedy struck. Danielle’s 18-year-old son, Tyler, football star and graduate of Excelsior Springs High School, was shot and killed. Distraught, she couldn’t keep her job at Taco Bell. Her recovering mother lost her job, too, as well as her house, so Danielle and youngest daughter Aubreyona moved in with an aunt in a small Raytown apartment, where they could stay temporarily, but not long-term.

Danielle was in the midst of the storm.

But two weeks before dog grooming classes were set to begin, she made one more call to Natasha, and learned that a previously accepted student had dropped out. Danielle was in.

Grooming Project students face hurdles that require as much help with life skills as they do job training, and Danielle is no exception. Natasha, EPEC board members and volunteer mentors helped find shelter for her and her daughter, first at City Union Mission, then in a rental house furnished with tables, chairs and beds donated by the school’s supporters.

Without a car or driver’s license, Danielle’s transportation to grooming class was precarious, so the Grooming Project’s team of supporters showed her how to navigate the city’s bus system.

After learning that Aubreyona was no longer attending grade school – unable to get to and from the school she had previously attended – they enrolled her in George Melcher Elementary just a few blocks from Danielle’s house. They donated books for the youngster to read, too.

“I used to work nights at warehouses, and would just be going to work when the kids were coming home,” Danielle says of her older children, now 17 and 20. “But for Aubreyona, I can walk to the school to pick her up, and be with her after school.”

She adds that the eight-year-old is very smart and loves to read and write. “She wants to be a teacher when she grows up.  She would be an excellent teacher.”

“My time to shine” 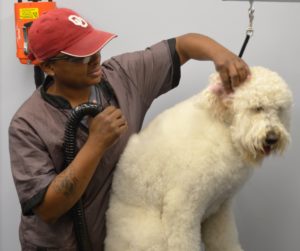 Danielle and fellow Grooming Project student Tanisha Davis aspire to someday open their own dog grooming studio. The two are close – “like a pair of pants,” Danielle says — and will complete their required month-long internship shadowing Grooming Project staff, learning bookkeeping, scheduling and other basics of running a dog grooming business.

In the meantime, Danielle hopes to find a full time dog-grooming day-job on the bus line, offering insurance, vacation and pay of $15 or more an hour – something she could hardly dream possible just a few months ago.

Her prospects are good. “She can groom as many as six or seven dogs a day, a pace that normally takes three or more years of experience to achieve,” Natasha says. “It’s something she loves and does well. Even when life is hurling baseballs at her, she will have the work to stabilize things for her and her child,” she says.

Danielle remembers telling Natasha early on about the struggles she’s faced, wondering when her time might finally come – and believes it now might be just around the corner.

“I’ve gone from no job and no home, to dog grooming school and a furnished house for my daughter and me,” she says with pride, and no small amount of wonderment.

Sept. 21, 2016 update: Danielle’s story is featured in this article from the Kansas City Star.