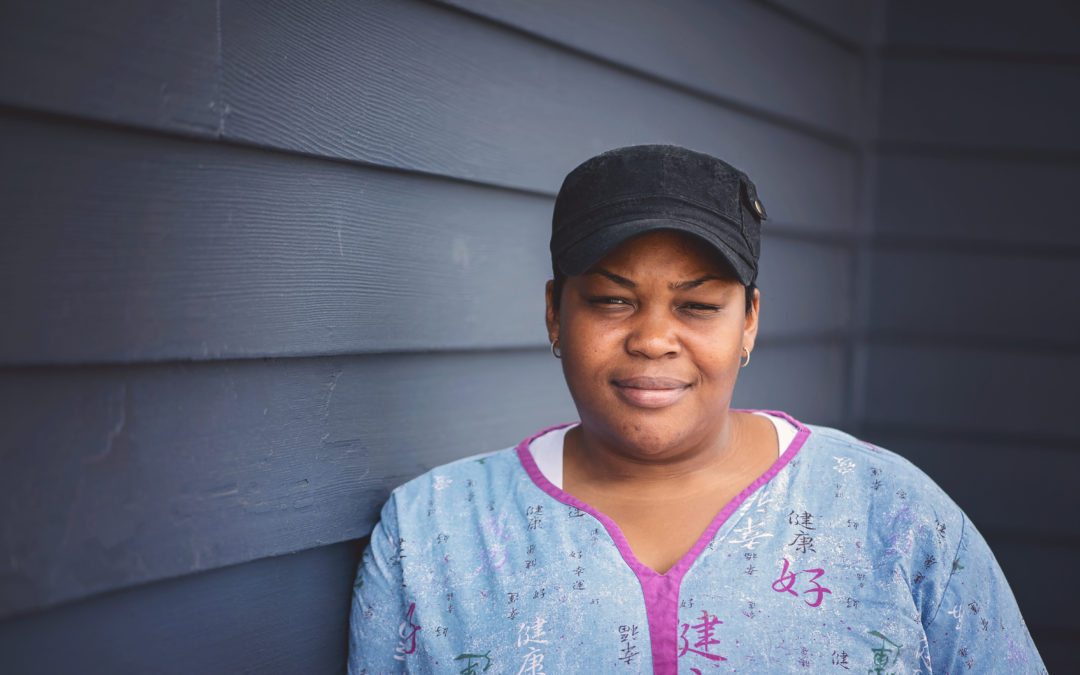 Christine, single mother of two and a KC native, grew up watching her mother cut and style hair.  After graduating high school, she decided to give cosmetology school a try for herself. She earned her certificate and started working in a salon, but soon realized that it didn’t feel right. “I liked doing hair, but I began to really worry a lot about disappointing clients. It became very stressful.”

She decided to focus more on a field that involved helping people, finding a part-time job in home health working with senior citizens.  “I loved feeling like I was taking care of people and giving back to my community, but it was harder than I expected it to be emotionally.” The kind of care she had hoped to provide patients with was not what she was witnessing on-the-job.  The position was also low-paying, forcing her to work a second evening job to make ends meet.

Just as her discomfort with home health had started to grow, Christine happened to be approached by a woman at Operation Breakthrough about The Grooming Project, which was enrolling its first class of students. She had not had much experience with animals as an adult, so the idea of working with dogs made her unsure at first. Her kids needed something more stable than her part-time job at Taco Bell, though, and the home health position she was trying to leave for emotional reasons also wasn’t getting her family anywhere financially.

“Once I started the training, I fell in love with grooming immediately. It’s calming and relaxing. Dogs are very smart. They can sense how you feel. If you’re feeling angry that day, they can feel that. It has made me learn how to adjust my emotions and feelings about what I’m going through in order to put them first.”

Christine’s calm and empathetic nature—the same one that made working with aging and ill senior citizens too emotionally exhausting—has allowed her to have success with even the most anxious of dogs since starting her full-time grooming position. Working at a local vet clinic she regularly sees clients with dogs who have previously only been able to be groomed after being sedated. “I always tell the owner, ‘Just let me try first before we go with the sedation.’ And each time I’ve been able to calm them down and groom them without it. It’s important to talk to them and have a gentle hand. They can pick up on any negativity in your voice or in the way you handle them.”

Her children can feel that same calmness at home since starting this new phase of life. “My daughter senses that I am happy with my job. She wants to be a groomer, and she wants to get a pet now. A lot of people get upset when they have to go to work, but I don’t show any signs of that. I am calmer at home now because I know everything is taken care of. We’re able to have some extra things that we couldn’t have before. I’ve been able to get them cable—something they really enjoy that lets them relax after school. We have reliable transportation. I can get them the clothes they need on my own. Going to work I feel like I’m not working at all. The dogs are helping me as I’m helping them.”

The transition from grooming training to real life was not without its difficulties, however. Because Christine was in The Grooming Project’s first graduating class, the Bridge Program, which offers additional support for 18 months post-graduation, had not yet been established. “When you do get out in the field and start making a lot of money, your budgeting changes a lot. You think, ‘I can do this, I can do that’ for the first time and it gets exciting. It’s easy to get wrapped up in that. But I realized quickly that I needed to get a handle on it and plan ahead.”

Managing a full-time, sizeable salary and bills while simultaneously losing government support services for the first time was a welcome change for Christine, but a change nonetheless.  “When you’re living off of food stamps and welfare you feel like you’re under someone, so when you’re out from under that, it eventually feels so good. But at first, I was very, very scared, because welfare had always been there to fall back on for my kids if I needed it. I found myself still worrying how we were going to eat, even though I knew I could go to the store and buy what we needed. It took a while before I could say, ‘Ok, I got this’ and really believe that. Just being able to go to the store myself and work for it feels so good. I think women can overcome that—you don’t need to be on welfare. It’s such a good feeling to be off welfare.”

Becoming a professional groomer has also afforded Christine an intangible luxury as well—significantly more quality time with her kids. “Being able to support your kids and have that time in the evenings with them is wonderful. Before, I had two jobs at once, all hours of the day, and it left no time for them. Now I am home with them after school, I play with them and cook for them. That’s what they need. If they’re happy and healthy at home, they’re going to be happy and healthy at school.”