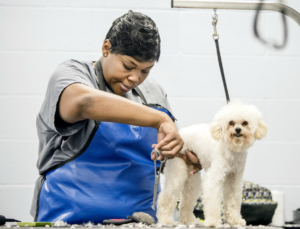 Christine Banks’ one-year-old son is taking his first steps. Her five-year-old daughter is about to lose her first tooth. And Christine is learning to speak up for herself, her kids and her dreams for their collective future.

Those dreams — of a job she enjoys and a better future for her children — are beginning to look achievable for this soft-spoken, 26-year- old introvert who, as one of six students in The Grooming Project’s inaugural class, is well on her way to a career grooming dogs and to being the best mom she can be.
“Christine is sweet and quiet – and that’s her challenge,” says Natasha Kirsch, The Grooming Project founder. “We’ve worked with her on being more assertive, and it’s been fun seeing her grow.”

“She knows that to be successful she must stand up for herself and be ruthlessly focused on her own dreams. That means she’ll need to say ‘no’ to people who try to distract her.”

Christine doesn’t talk much about her upbringing beyond describing it as “rocky.” She did graduate from high school, and dipped her toe into several career paths, none of which felt quite right or paid enough to adequately support her children. 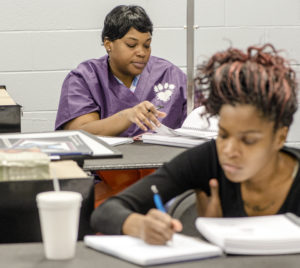 She has a cosmetology license and worked in a hair salon for awhile, but couldn’t get enough hours to sustain herself and was uncomfortable in what she felt was a gossipy work environment.

She enrolled in Penn Valley Community College twice, first to study business, then to earn a Certified Nursing Assistant license to work in home health care. She liked being able to help people, but was discouraged by the attitudes of some of her coworkers.

Now she thinks she may have found her calling. Not only has she forged strong bonds with fellow students, but she enjoys the work, and the dogs.

“It’s calming and relaxing,” she says, adding that she enjoys the one-on- one time with each dog and with the owner when it’s time for the dog to go home. Plus, dogs don’t gossip! “They need someone to speak for them,” she says.

In addition to training for dog grooming jobs, The Grooming Project offers students classes in parenting and money management, something Christine has welcomed.  “In the parenting classes, I’ve learned to set expectations and then let my daughter do things for herself, like clean her own room, instead of doing it for her, and then to compliment her on what she did right and point out what needs to be better. It instills a sense of personal responsibility,” she says.

As part of the school’s budgeting classes, she learned to keep track of her spending. “I hadn’t realized how much of my income was going to fast food,” she says. “Now I write down all my bills, see what I’m spending and where the money goes. I make better choices.”

She’s also working on her customer service skills, which for this quiet young woman means coming out of her shell. Answering the phone, greeting clients and interacting with customers is not only good job training, it’s also helping her learn how to speak up to and set boundaries with others in her life who make unreasonable demands on her time.

With the Grooming Project’s student stipend, she has been paying bills on time, and has even been able to buy some new shirts for her kids. She has an internship with a mobile dog grooming salon, and hopes to turn it into a full time job –eventually, perhaps, owning a mobile grooming salon of her own.

Her other goals are practical – and achievable.

Get off food stamps. Move out of public housing and into a home in a good neighborhood. Save some money, transition to a better life, open the doors of opportunity for her children.

And pay it forward. “At the school I’ve appreciated having met these women who are learning from each other and care about each other. We are a family,” she says. “I want to stay in touch with them, and come back to help motivate the next class.” Maybe drive up in her mobile grooming van and show off just a bit…

“I just know Christine will make it,” says Meg, her coach. “There’s a fierceness behind that quiet nature that will help her continue to fight for a better life.

“As long as she keeps herself and her two children at the forefront, she’ll find her way step by step.”