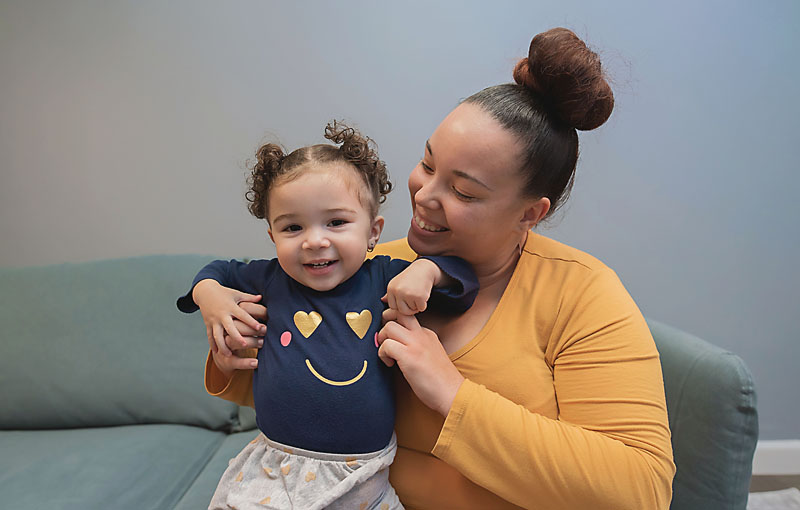 The Grooming Project training leads to metro “Best Of” recognition—and bridges the generations for one program graduate.

When April Utter saw a Help Wanted posting for a dog groomer at Camp Bow Wow’s Westport location in June 2020, she knew she had to act quickly.

“I thought, ‘Let me hurry up and get on this before somebody else does,’” she said. “And the manager, the owner here [at Camp Bow Wow], just hired me right on the spot.”

April saw the position as an opportunity to leave her job at a corporate chain that provides dog grooming and to put her talents to work for a locally owned franchise where she could forge strong relationships with the dogs, their owners and staff.

“They [Camp Bow Wow] have doggy daycare, and they also do doggy boarding and everything,” April said. “Just being able to be around dogs all day long—even if I want to come in on my off day and just cuddle with a dog, I’m glad that I am able to do that. And friendly staffs … they are super friendly with the dogs and the customers.”

April has parlayed those relationships into recognition in The Pitch’s 2021 “Best of Kansas City” competition, where she and Camp Bow Wow recently earned runner up for the Best Groomer in Kansas City award. Winners are selected through online voting.

Ambitious as she is, April says she “really wanted” first place and won’t give up on striving for it next year.

Giving up is not something April does.

Until a few years ago, the idea of being a dog groomer was the furthest thing from April’s mind. She was raising her infant daughter and on public assistance. More than anything, she was looking for an opportunity to get on her feet. A Head Start professional who visits homes to give parents tips on adjusting to and handling a newborn told her about The Grooming Project.

April decided to apply because she wanted to start a career and not live just paycheck to paycheck like she had been doing. She filled out an application and started the six-month program in March 2018.

In addition to the technical skills of dog grooming, April learned valuable life skills through The Grooming Project program. In fact, those skills have helped her to bridge generations.

Sent to live with her aunt as an infant, April had spoken with her birth mother, who was an addict and alcoholic, on the phone occasionally throughout her life. But she’d never met her in person. The Grooming Project program gave her the skills to deal with the anger and abandonment issues she had with her mother, and she was finally ready to have an “adult” face-to-face conversation with her. She asked her sister to arrange the meeting.

April said she still doesn’t have a relationship with her birth mother, but “I felt good finally getting to see what my biological mother looks like and have helped to get her the care she needs in a nursing home, because she wasn’t capable of living by herself. Getting to see her and help her living situation gave me some closure.”

And if skills she learned at The Grooming Center helped her achieve closure with that part of her life, those same skills have opened up a future filled with opportunities for April and her daughter, who is now 4.

“In learning how to groom dogs, I learned how to be patient, gentle and calm handling situations, especially with my daughter,” she said. “The impact it has on my daughter, who has anxiety, to be able to let her be around animals makes her more relaxed. She’s calm. She’s not stressed out. She’s not having one of her episodes.”

Now off public assistance, April is especially proud of the role model she is for her daughter. April has taught her how to bathe dogs and tie bandanas. “She’s wonderful with the dogs. I hope she is going to end up going into grooming or being a veterinarian. She also likes to take pictures of dogs and is very creative. Maybe she’ll be a pet photographer!”

Always looking for opportunity, April plans to use the “Best Of” award from The Pitch as a marketing tool to attract more clients.

“And my next goal,” she says, “is to get into some type of grooming competition. I want to test my ability and see what I am capable of doing.”

You can empower women like April by donating to The Grooming Project today.