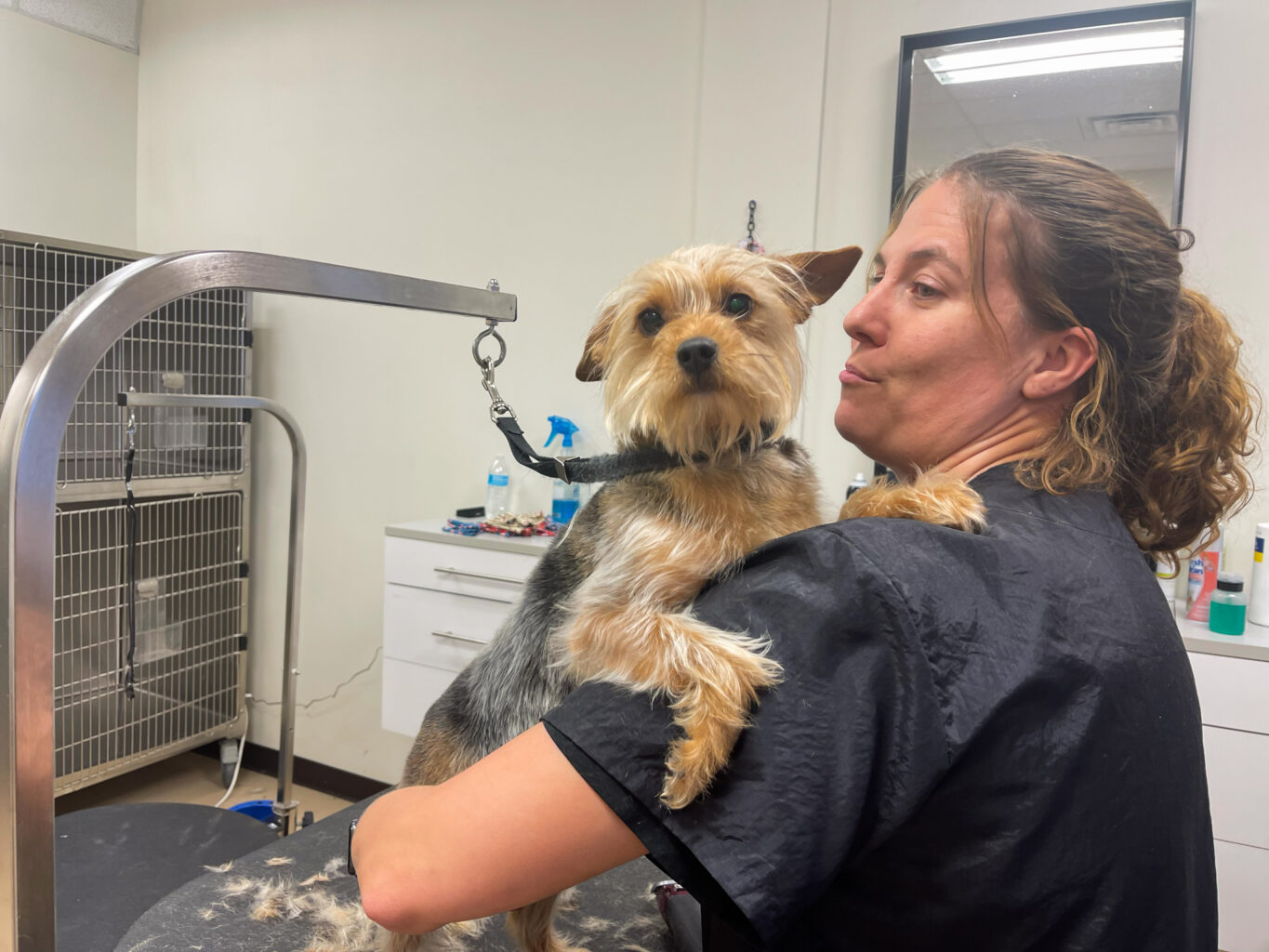 Christina Lough, a January 2022 graduate of The Grooming Project, said one of things she likes most about working as a groomer at The Salon in Lee’s Summit is the creativity to adapt a breed’s standard cut to a dog’s particular facial features.

“What’s considered a standard cut for a particular breed, you still have some leeway based on the dog’s particular features to balance out what the client wants to what actually looks right on the dog,” she said.

In a similar manner, The Grooming Project teaches students—mostly single mothers—a standard set of pet grooming skills to prepare for sustainable-wage jobs that allow them to support their families without government assistance. But students also receive the benefit of wraparound services and counseling services based on their specific circumstances.

The circumstances that brought Christina to The Grooming Project stem from her military deployment to Iraq, where she managed trucks, the motor pool and an array of responsibilities that come with being part of the transportation and logistics team. During her tour, she was involved in an incident that continues to leave her struggling with PTSD and major depression.

Returning stateside, Christina was stationed first at Fort Hood in Texas and then at Fort Carson in Colorado. After leaving the military, she worked in IT for Denver Public Schools. When the pandemic hit, she was laid off, so she decided to return to Missouri, where she grew up.

“I just came back here towards family,” she said. “My father’s having some health issues, so I wanted to be closer.”

Arriving in Missouri with her two children, no job and no income, Christina applied for food stamps. When her caseworker told her about The Grooming Project, Christina jumped at the opportunity.

“I’ve always loved animals, and I’ve always been really good with animals,” she said. “My most exotic pet was six raccoons growing up. Dogs, cows, you name it, we’ve had it. We’ve had a baby skunk in our care. So, when I got this opportunity, it fit well for me.”

Although Christina gives the pets she grooms lots of love and attention, what she’s received from them in return is helping her heal.

“The biggest thing I learned was the handling of the dogs,” she said. They check your energy levels. Because I have PTSD and depression, I know my energy levels can go very unchecked, very easily, very quickly. And it varies from different times of the day. If events are happening around me, my head can get away from me. Handling the dogs made me evaluate my energy levels. I have to keep them at a very consistent, mellow, calm energy despite what’s going on around me. Otherwise, the dogs become reactive to how I’m feeling.”

Learning to manage her energy levels has helped her interactions with her children too.

“Of course, all this transitions inside the house as well because I’m just able to check those levels differently now. It helps me especially with my 16-year-old, who’s driving now,” she laughed. I’m also teaching my children how to apply the pet grooming skills I’ve learned to their 4-H animals.”

As a recent graduate hired by The Salon, Christina is fully vested in its future and its growth.

“We are doing amazing things there right now,” she said. “I hope to keep seeing it grow like it is. The growth is allowing us to hire more graduates from the school.”

Christina is looking forward to the next steps in her own future too. She’s working to purchase 28 acres for a business and farm. She’s set a goal of being able to buy the property within a year, and she’s started an LLC for the farm. Her growing menagerie already includes a hamster, a bearded dragon, fish, a cat, chickens and turkeys, a Scottish long-haired calf, and a KuneKune pig. Most of them reside on her parents’ property until she can purchase her own land.

“I’ve been a single parent for the longest time. It’s just been me and my kids,” Christina said. “And now we’re looking forward to a smoother transition in our life.”